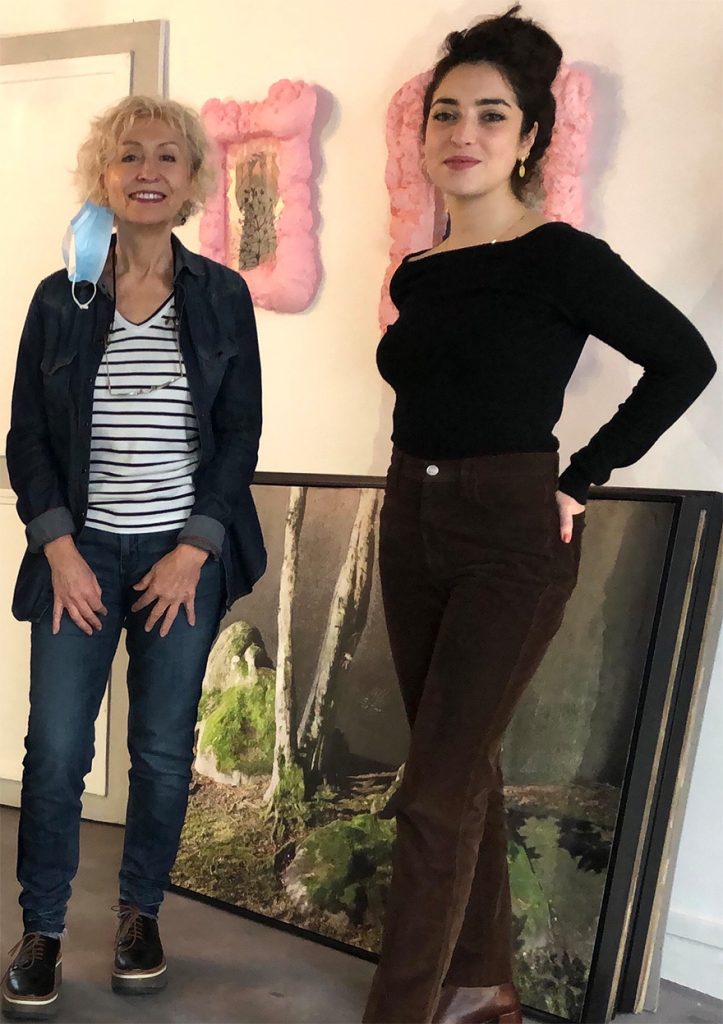 Christine Barbe’s landscapes are liminal spaces, in other words, they are initiatory passages between two worlds where the order of reality is illuminated by strangeness. Floating and depopulated places, often obscured by a horizonless background, they also betray a magical presence, indicated by the chemical and mineral palette. A surgical pink or a toxic green regularly contaminate the main figures, like luminous and irrational sources radiating from within the natural elements. Liquid and telluric forces mingle in the composition, which, like water and earth, are felt through multiple perceptions and escape those who try to hold them back. Christine Barbe’s work has everything to do with fluidity, buoyancy, immersion, which form so many facets of a way of thinking about water, a “hydrant psyche” to use an expression by Gaston Bachelard. This thought is reflected in the artist’s techniques, which are multiple and changing, as much as it is in her subjects, among which evanescent figures and changing landscapes recur.

In her latest series of watercolours on paper set in expanding foam, Christine Barbe combines two mediums that are opposed in their texture and colours. Here, the dummy frame imposes itself as much as the image. Seascapes or portraits of her drowned self are engulfed in what looks like pink foam, like a chemical and sweet coral colonising everything in its path. The work becomes an object, both prosthetic and totemic, in the sense that it evokes, on the one hand, an aseptic and ethereal artefact and, on the other, an emblem from some still fresh legend. As it so happens, in Greek mythology, the goddess Aphrodite was born from the foam or moss (aphros) of the sex of Ouranos, cut off by Cronos. Therefore the “plastic” aspect does not dismiss the poetry. In the same way, the photographs of Paysages plombés have everything to do with a form of belief that has endured through the ages. The moss is again expressed in the form of motifs with the rocks covered in luminescent and anisotropic mosses in this series animating mineral or plant scenes buried under the snow or lurking in the forest, like autonomous fragments of parallel worlds. Physicist Leonard Susskind speaks precisely of “universe foams” to designate the multiple universes that appear and disappear like gas bubbles. Impenetrable places, evocative of ancestral rituals commonly associated with megalithic forms, these wood edges of Persephone captured by Christine Barbe also have an alchemical dimension, notably in the very personal technique developed by the artist: the photograph is taken in graphite powder, which is diluted, sanded, scratched, sculpted with a plaster roller. The result is a strange and compact background, where the crossing is not self-evident, as in the anabasis of Orpheus guiding his Eurydice towards the light. The self-portrait of the submerged artist is again found in Rêves de rébellion and Lignes de flottation, this time in the form of ghostly videos or translucent figures made with ink on paper diluted with solvent. In these claustrophobic compositions, the body is so girded that it seems to emerge from itself, like a poison reconfiguring the individual from within. A particular intimacy unfolds in the watery or nocturnal substance that always veils these images. As a whole, Christine Barbe’s work, as prolific as it is in its artistic and technical research, is to be apprehended through so many filters to be pierced, dense and dull like oil slicks or thick nights in which to detect the light.